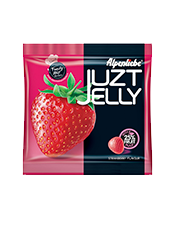 Boil the water in a pan with oil and salt. Pour the rice flour on steady steam, stirring continuously to prevent lumps from forming. Seal the cooker with lid and cook till the steam begins to escape. Open the cooker and sprinkle water. Seal the cooker with the lid and cook till steam begins to escape again.
Mix well and remove the dough on a plate.
Grease your palms with some oil and knead the dough till it turns smooth. Divide the dough into equal portions.

Mix Alpenliebe Juzt Jelly with coconut and divide into equal portions. Grease your palms again and spread one portion of the dough into a round disc, thinning the edges with your fingertips.
Stuff one portion of the jelly mixture and gather the dough together in tiny pleats. Then press lightly and form a cone at a top. Place the modaks on a perforated plate and steam in a pressure cooker with the lid on and cook for just 10-12 mins.